Introduction to the Volcano Classic

Every market has its big players, and the vaporizer market is no exception. Storz & Bickel has been a large presence in the vaporizer market for over 20 years and have relied on their workhorse, the Volcano Vaporizer, as their only offering for over nine years and they’re still producing them to this day. The Volcano is a plug in vaporizer that relies on filling a bag with hot air that passes through the herb chamber which sits on top of the Volcano. The bag attaches to the herb chamber via one of two different attachment valves.

The Volcano Classic is one of the longest selling commercially available desktop vaporizers that is still sold today. There have been some minor under-the-hood improvements to the Volcano Classic along the way but its core identity remains the same. The Volcano has earned its reputation as a safe and reliable vaporizer through a long history of customer satisfaction and continuing re-investment from Storz and Bickel. Very few vaporizers have the benefit of a long and well documented history the way the Volcano does.

The Volcano Classic is the lower-tech alternative to the more modern Volcano Hybrid.

It lacks a display which would show the current temperature, takes longer to reach temperature, and uses the classic style filling chamber that doesn’t lock onto the Volcano for whip-use. Functionally the Classic can provide the same experience the Hybrid can once they’re both warmed up to the same temperature.

Flipping the red switch turns the Volcano Classic on and begins the heating process. It takes about five minutes for the Classic to reach it’s set temperature, when the set temp is reached the center light, marked ‘Control’, will turn off. From time to time the control light will turn on while the Volcano is running the heater to maintain the temperature.

The green switch marked Air is connected to the air pump which moves air over the heater and then forces the hot air up into the herb chamber and bag. The Air button will turn the pump on whether the Volcano is heating or not, so it can be used to help cool the vape down after a session if you’re planning on packing it up.

v
The Easy Valve kit is designed to be a plug and play solution for the Volcano. From personal experience I’d say the Easy Valve meets and exceeds the qualifications which make it an “easy” solution. The bags are pre-attached to the nozzle which connects to the herb chamber.

A mouthpiece which attaches to the bag nozzle allows the user to draw from the bag without needing to worry about vapor escaping when not in use. The mouthpiece works by way of a rubbery seal which is scored in the shape of an X. When the mouthpiece presses against the seal it opens up allowing vapor to flow out of the bag. Once the bags have worn out and need to be replaced, the easy valve nozzle (and bag) can be disposed of. 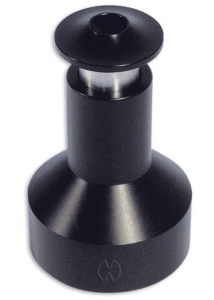 Unfortunately I do not own nor have I had the chance to use a solid valve. I understand that the benefits of the solid valve lie in the ability to create various size bags due to the nature of the solid valve being designed to accommodate replaceable bags as opposed to disposable bags.

The downside of this is that the solid valve mouthpiece and herb chamber have a larger variety of moving or removable parts that will need to be cleaned and/or replaced with time. To sum up my lack of experience: The Solid Valve is more versatile at the cost of significantly increased maintenance.

It amazes me to say it, but the Volcano downsides aren’t in reference to the functionality of the vaporizer, only to its size and price. The Volcano is one of the largest vaporizers on the market not counting its bag, standard operation of the Volcano will also generate some noise which may not appeal to all audiences. Size aside, the Volcano is on the higher end of the vaporizer price spectrum, but I dare say that it has proven to stand the test of time and the price may accurately reflect what other vapor enthusiasts are willing to pay.

While the Volcano Vaporizer may not be for everyone, I’d say it fills a great niche that other vaporizers have yet to compete with. As a bag vaporizer, the Volcano is top of its class. Despite multiple attempts on my part to sell my Volcano due to lack of everyday use (which would help justify its price tag) my wife refuses to let me sell it. Every time we have company over, the volcano comes out of storage (I store my Volcano in a VAPECASE Volcano Soft Case which is, in my opinion, the best and only way to store and travel with a Volcano) and entertains the crowd for a night. In closing, the Volcano by Storz & Bickel holds the same place in my heart as my copy of Mario Party. Its not always my first choice when I’m alone, but if you add a few people to the mix it becomes the gold standard in fun.

The Volcano Vaporizer (Digital or Classic) is available for purchase in the United States here (or click the banner above for free shipping) along with both valve options.

This site uses Akismet to reduce spam. Learn how your comment data is processed.

volcano owners may appreciate a whip utilizing standard silcon hose over the herbchamber.

additionally the aquavape by vaporfection = the best combo ive ever experienced.

I’ve seen that done, still haven’t tried it myself.

Have you seen the glass dome that sits on top of the Volcano and fills with vapor? It has multiple hose attachments for a hookah style Volcano experience.

Thats a fantastic idea Sindre. As I do reviews I'll keep a compilation of the different effects from each vaporizer and put it together into a comparison post. Keep an eye out for it in the coming weeks.